10 Exquisite AtomTime Smartphone Flash Synchronized watches are about to drop from the heaven!! Are you willing to catch it, or them?

The rules are simple! Anyone worldwide can participate! 10 FREE watches will be given away

1st ever developed Watch whose time can be synchronized with Smartphone


Referrers of what and how? You may ask? And here is your answer!

1. TECH BLOGS/FORUMS: Present us to a popular tech blog and publish an article about us, 10 points will be yours!

2. NEWS ARTICLES: Present the iAtomic watches to a popular news website, and an article is published, 10 points, yours again!

3. Gadget Forums/Blogs: Present the iAtomic watches to a popular gadget forum/blog, and an article is published, 10 points, score!

4. Share Our Indiegogo Campaign: Share our campaign  with your friends, that’s how easily you can earn 2 point!

The i-Atomic Watch is a “Smart” Watch!

Because of the Intelligent Microchip inside, the i-Atomic Watch is a “Smart” Watch!

The launch of the i-Atomic watches by AtomTime Suisse sa has astonished the watch industry in the field of high-tech watches, along with making people wonder, at a time when no company is qualified to conquer the signal-receiving problems that have been bothering the Radio Controlled watches ever since their appearance, how AtomTime made it. The answer is summed up in two words: “Internet” and “microchip”. Given a large amount of information on online synchronizing has already been provided; the focus will be shifted to the intelligent microchip inside. With all the expectations concentrating on this small component, now the answer is about to be unveiled!

An integrated circuit artificial intelligence chip, which can adapt to the environment change and adjust the watch movement, is embedded. It is highly sensitive, able to recognize the subtle temperature and location change. Normally a watch has a tendency to move unsteadily when the surrounding temperature deviates from 25℃(298K). Under these circumstances, the intelligent microchip will automatically memorize the deviations, giving orders to the watch that it should move slower or faster.

At the same time, the intelligent microchip will keep a close record on each calibration. The first synchronization brings absolute accuracy to the watch. For example, one month later during which the weather is cold, the watch might be 10s faster than the real time. Not only will the second synchronization re-tune the watch, but also it can send the inaccuracy message to the microchip. In this way, the intelligent microchip will command the watch to adapt itself to move slower, probably leading to the watch being 7-second slower than the real time at the end of the second month.

Hence besides putting the precision of the watch back on track, the third calibration updates the memory status of the intelligent microchip, making the watch realize that it should move a little bit fast this time. The subsequent deviations will be +5s, -3s, +3s, -2s, +1s, -1s, +1s, -1s, +1s, -1s…Eventually the average error maintains within 1 second per month considering most of the quartz watches can only guarantee to be +/- 15/month accurate. And the longer the watch is worn, the more accurate it becomes. 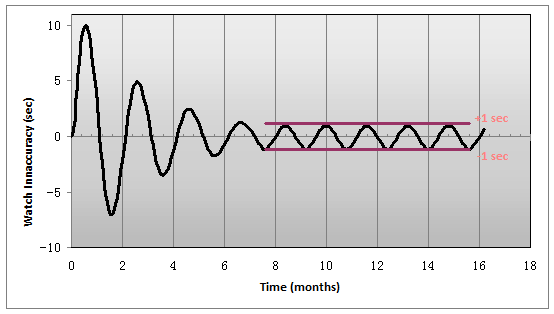 This unrivalled technology, protected by patents. Every component of an i-Atomic watch is meticulously made with an aim to help you catch every second of your life. And we mean it! Every second! No matter where you are and how is your surrounding environment, in four seasons, in freezing or blazing days, in Russia, in Africa, in South America or in any corner of the world, the i-Atomic watch is with you to capture the precious moments of your life by the count of seconds!

I believe i-Atomic watch will be a perfect substitution for the Radio Controlled watch because of its strong connection to the whole world; it’s anytime synchronization and its customized simplicity. The i-Atomic watch merits more attention because for the first time in history it brings the concept of being precise anytime to every part of the world. Not only do the i-Atomic watch correct time, but also it brings people closer as we are all connected in this world!
Posted by Unknown at 1:18 AM No comments:

No.1 accuracy of milliseconds – BEST substitution for a Radio Controlled watch

The online synchronizing system makes it possible to display accurate time anytime within milliseconds anywhere, breaking completely away from the geographical limitations encountered by the Radio Controlled watches. Each synchronization brings the accuracy within one millisecond. No transmitters, no signals, no wifi, no bluetooth, no RFID needed.

No.2 It is a SMART Watch

The embedded intelligent microchip can adapt to the environment change and automatically adjust the watch movement, eventually reducing the time error to 1 second compared to the 15-second time error of a normal watch.

It is as simple as facing the atomic watch to a smart phone or a computer for few seconds in order to complete the synchronization.

No.4 It can be brought anywhere

If you fly among different time zones, the AtomTime atomic watch is a better companion which can easily track down the accurate local time. No longer being late. No more missing a plane.

No.5 Not afraid of water

The water resistant ability of an AtomTime atomic watch is 10ATM. As a majestic-looking watch representing men’s masculinity or women’s independence, it is capable of handling some extra toughness.

Without consuming any power on signal-searching, the lithium battery of an AtomTime atomic watch enjoys a long and trouble-free life expectancy of 3 to 5 years.

I hope the above tips will enhance your trust and affection for the AtomTime Atomic watches with absolute accuracy, user-friendly simplicity and smart technology, leading you to making the right decision of buying a watch with which you are satisfied.
Posted by Unknown at 9:08 PM No comments:

4 Important Tips - Whether you should Buy A Radio Controlled Watch, or Not

4 Important Tips - Whether you should Buy A Radio Controlled Watch, or Not

No.1 Where do you live?
If you live near the following 5 areas, namely the west of US, the northeast of China, Japan, the UK or Germany, you can CONSIDER the idea of buying a Radio Controlled watch because these are the only areas where the 5 major transmitters in the world are located.

No.2 Are the signals clear and consistent?
If the places you live or work are not wrapped up in concrete reinforcing bars, you can move 1 step further into the idea of buying a Radio Controlled watch. The problem with a concrete building is that signals cannot penetrate through its metallic structure.

No.3 Do you expect a long battery life?
In the event of inconsistent signals, a Radio Controlled watch will keep searching, resulting in the increase of power consumption. Although some Radio Controlled watches claim to use solar energy to compensate the power loss, the battery might still be drained out in 3 to 6 months.

I hope these tips above will help you make a right decision when it comes to buy a Radio Controlled watch. Above all, we are all reluctant to waste time or money on something that does not work well.

I personally used to own a radio controlled watch, until the arrival of iAtomic watches,  I highly recommend to visit the website for more information regarding the new breakthrough in atomic watch industry.

Synchronize your smartphone with the iAtomic watch

Atomic AtomTime watch, a timepiece relying on the Internet to synchronize the time, is a perfect substitution for the Radio Controlled watch which has a specific requirement for the signals. The truth is a half part of the world has no transmitters, while people who want accurate time can come from anywhere. Now those who live in Africa, Russia, most part of Asia, South America, Canada, Australia where there is no transmitter at all, or even areas where transmitters are located but still suffer from problems such as signal inconsistency and signal block, they have the chance to regain control over time as this atomic watch makes it much easier to catch every second.

With Internet growing popularity in the world, the number of world population who can enjoy the benefits of Internet is sure to keep rising, which means it is getting more difficult to find a spot where the atomic AtomTime watch will not work. Unlike the Radio Controlled watch whose time calibration is geographically limited, the atomic AtomTime watch is able to offer the most accurate time as long as a smart phone or computer is accessible to you, not to mention these two technologies are penetrating people’s life at a higher speed more than we can ever imagine. The idea of no more missing a plane or being late puts people’s mind at ease when they gain the upper hand by controlling time.

Besides accuracy, another remarkable feature of this watch is its simplicity. It is as simple as facing the atomic watch to a smart phone or computer for few seconds in order to complete the synchronization.

And it is not only the Internet that helps the watch maintain accurate, an embedded intelligent microchip can adapt to the environment change and automatically adjust the watch movement, eventually reducing the time error to one second compared to the 15-second error of a normal watch.

As the iatomic AtomTime watch relies on Internet to calibrate the time, you might wonder what will happen if there is no Internet. The answer is it will still synchronize the time with your phone or computer but without the guarantee of the accuracy up to one microsecond.

There are numerous watch manufacturers on this planet. Some make the luxury ones. Some care about new technologies. Some put tremendous efforts into the watch appearance. AtomTime does not compete for the most expensive one, but for the most accurate one, the most high-tech one, and the most masculine one.

for more information please visit us @ Atomtime
www.atomtime-watches.com ( under construction)